Henderson & Waterkotte, P.C. is a full-service criminal defense firm dedicated to helping individuals fight criminal charges in Missouri and Illinois state, federal, and municipal courts. In addition to our criminal defense practice, we also assist people facing orders of protection, probation violations, sanctions by the Nursing Board, and discipline by a college or university. Please click on our service areas below to learn more about how we can help you with your situation. 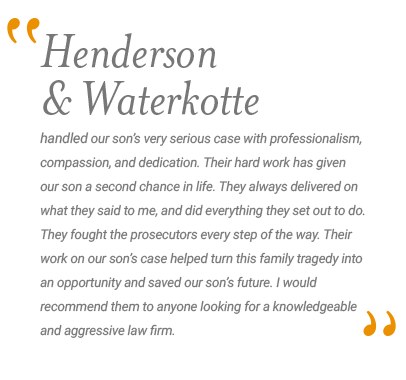 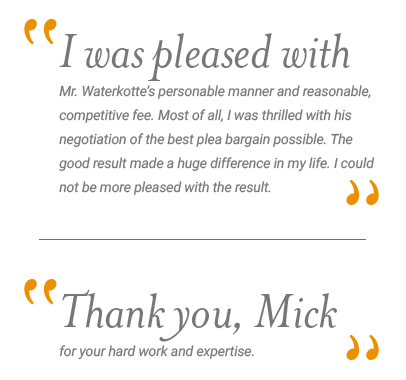 Absolutely. Having representation at an early stage in the criminal process can significantly increase your chances of no charges being filed or charges being reduced. An attorney can advise you on what rights you have and protect those rights. Additionally, a criminal defense attorney can act as a liaison between you and the investigators, so you do not have to speak with them. Frequently, individuals make the mistake of believing that there is no need to hire a lawyer until they have been arrested. Do not make the same mistake.

A misdemeanor is a crime that is punishable by up to one year in the county jail and a fine of up to $2,000.00, or any combination thereof. Felonies, on the other hand, are more serious crimes which are punishable by more than one year in the Missouri Department of Corrections. If convicted of a felony, prison sentences can range anywhere from one year all the way up to a life sentence or the death penalty, depending on the classification of the felony.

Broadly speaking, the criminal process is initiated once the police make an arrest. Once an arrest has been made, the suspect will go before the judge for a bail hearing to determine what, if any, the amount of bail will be. The next step in the criminal justice process will be an arraignment or preliminary hearing. At this proceeding, the judge informs the accused of the criminal charges against him or her, asks the accused whether he or she has an attorney or wants a court-appointed attorney, asks how the accused will plead to the charges, determines whether to modify the initial amount of bail and sets a schedule for future court dates. In felony cases, a judge will hold a preliminary hearing or grand jury proceeding next to determine whether the prosecution has enough evidence against the accused to proceed to the next step. Next, the accused may wish for his or her attorney to negotiate a plea bargain with the prosecutor. If a plea bargain is reached, the accused will appear in court to plea guilty to the charge and will be sentenced. If the accused doesn’t wish to accept the prosecutor’s plea bargain, the case will proceed to trial.

In most cases, you will have the opportunity to post bond to get out of jail while awaiting trial. The judge will determine the appropriate bail amount. There are several types of bonds the judge can require you to post before releasing you from jail. Many individuals accused of a crime seek help from family or friends to help post bond to get him or her out of jail. A bail agent or bondsman can also help post the bail if you are not able to raise the money needed to post bond yourself.

In most criminal cases, you will have the right to a jury trial. The U.S. Constitution gives a person accused of a crime punishable by a sentence longer than six months the right to be tried by a jury.

Yes. Generally, probation can be SES or SIS probation. For an in-depth discussion on this topic, please refer to our probation page.

Latest Take on the News